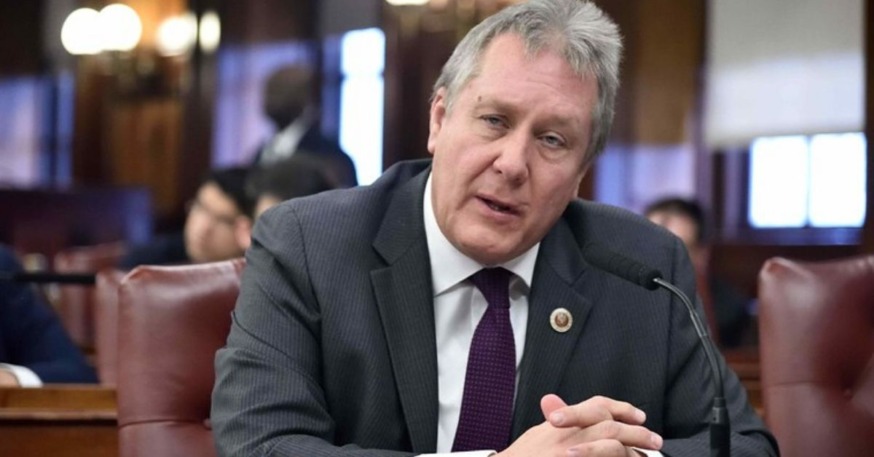 Council Member Danny Dromm has condemned the actions of a large group of protesters who demonstrated outside his home Thursday afternoon.

Around 100 Democratic Socialists converged outside his apartment building in Jackson Heights and demanded that the NYPD budget be slashed in half, Dromm said.

The protesters were yelling and shouting for about an hour on the roadway. Some held signs that read “defund the police,” “black lives matter,” and other DSA themed wording, he said.

“They were screaming ‘either you come down or we will come up’ to your apartment,” Dromm told the Queens Post.

Two protesters got into his apartment building and made their way up to Dromm’s second-floor apartment, he said.

The pair then banged on his apartment door while the chanting continued outside, he said.

“I believe this was totally inappropriate, violated my privacy and was probably illegal,” he said.

He said they were then thrown out of the building by the porter.

Dromm said he did not feel threatened but believed the protesters’ actions were not friendly and crossed a line.

“I have been an activist for LGBT rights for decades and we would never protest outside someone’s home,” he said.

Dromm said he is mystified that the crowd targeted him for police defunding given that he has already called for $1 billion to be cut from the $6 billion NYPD budget.

“I am miffed at why they would choose to protest an ally,” he said.

Dromm said he proposed the $1 billion cuts – along with House Speaker Corey Johnson and Council Member Vanessa Gibson – before any of the recent Black Lives Matter protests erupted around the country.

“At the time it was unheard of and I’m not sure they understand the whole process,” Dromm said.

Dromm is the chairperson of the NYC Council Committee on Finance which reviews and modifies the city budget and municipal fiscal policy.

However, the mayor typically proposes the city’s annual budget and the city council then negotiates with the mayor on spending. The mayor has proposed a 0.4 percent ($24 million) cut to the NYPD budget for FY2021 budget, Dromm said.

Dromm said the protesters have never asked for a meeting with him, or called into his district office which is located close by.

He said the entire protest was misguided and damaged their cause. He said the protesters were not well-received by his neighbors, constituents and other legislators.

“It cost the Democratic Socialists validity in the eyes of most of my constituents,” he said.

Dromm took to Twitter to call out the protesters yesterday and specifically urged Congresswoman Alexandria Ocasio-Cortez, a DSA member, to condemn their actions.

“She is a leader and a figurehead and should speak out against this type of behavior,” he said.

Ocasio-Cortez has not responded to Dromm’s appeal. Queens Post contacted the congresswoman’s office for comment but has yet to receive a response.

I’m calling on @AOC to condemn this action. Totally inappropriate to do this outside my home. As they screamed “Daniel, you either come down or we’ll come up” two @nycDSA members entered my building & began pounding on my apt. door demanding to be let in. Porter threw them out. https://t.co/uO1W9xLAqi

State Senator Julia Salazar, a member of DSA, spoke out against the tactics employed by the protesters on Twitter.

“I don’t think it’s strategic or constructive to aggressively knock on the door of CM Dromm’s home!” she tweeted. And this is the kind of mentality that is destroying this city. They think things should be a certain way, don’t really consider all points of an issue and then do whatever it takes to shove themselves and their thoughts on you until you give in. This was truly infuriating to read. I would have been truly frightened if I was in that apartment. I would have called the police! (Oh wait, he wants to defund them)