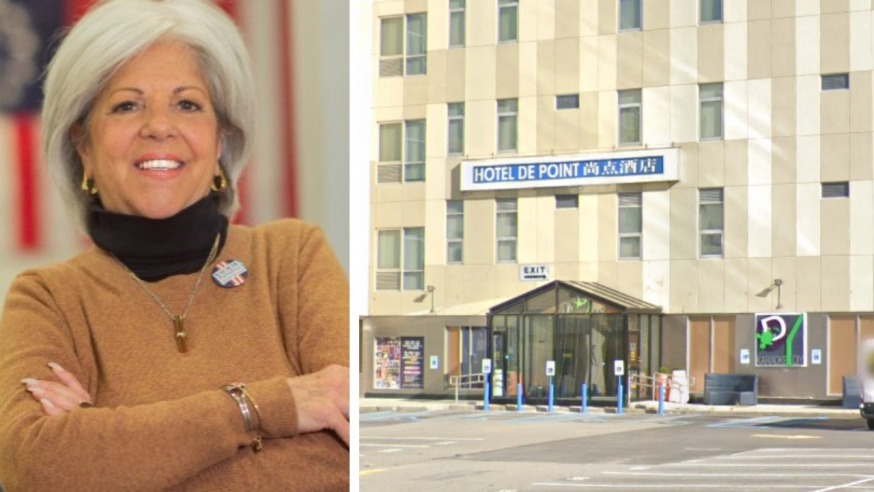 Last week Mayor Eric Adams announced plans to house asylum-seeking immigrants at a hotel in College Point (R) Councilmember Vickie Paladino came out in opposition to the plan Friday and the city has since reversed course (L) (Photos: Twitter and Google Maps)

The city, which announced last week that dozens of asylum-seeking immigrants would be housed at a College Point hotel, has reversed course following an appeal from Councilmember Vickie Paladino.

Mayor Eric Adams, Paladino said, notified her office Monday that the undocumented immigrants – who are being bused into New York from the Texas border – will no longer be staying in College Point. She said the city has committed to finding them accommodation elsewhere.

Adams was planning on taking over 115 rooms at the Hotel De Point, located at 20-07 127th St., to house migrant families, according to Paladino, whose District 19 seat covers the northeast section of Queens including College Point.

Paladino publicly opposed the plan in a statement Friday which she says led to the mayor’s U-turn.

She said that the College Point community does not have the resources to house the migrants and praised the mayor for heeding her concerns.

“I want to sincerely thank the Mayor’s office for being so attentive and responsive in this matter, as I made it very clear that the College Point community is severely struggling and simply not equipped to provide the specialized services the migrants require,” Paladino said Monday.

“I have been fighting for the residents of College Point since before taking office and we have made good progress with much more to do. The people of College Point and District 19 as a whole are my top priority, and their interests come first.”

The mayor is looking to house the migrants — all of whom are seeking asylum status in order to be in the country legally — in various communities throughout the city.

Texas Governor Greg Abbott has been sending thousands of migrants to “sanctuary cities” such as New York and Washington D.C. in recent months as an affront to what he views as President Joe Biden’s lax immigration policies.

Paladino criticized Adams Friday for not consulting with local councilmembers before making a decision to house migrants at sites in their respective districts.

“The city has provided no information on how these families will be cared for, where the funding for their needs will come from, or how long they will be housed there,” Paladino said Friday.

She said that housing migrants in College Point, for instance, could divert scarce city resources and strain local infrastructure at schools and law enforcement. She said the city should instead be helping the community fix the roads, improve garbage collection and enhance law enforcement. I wish Vickie Paladino was my City Council Member.